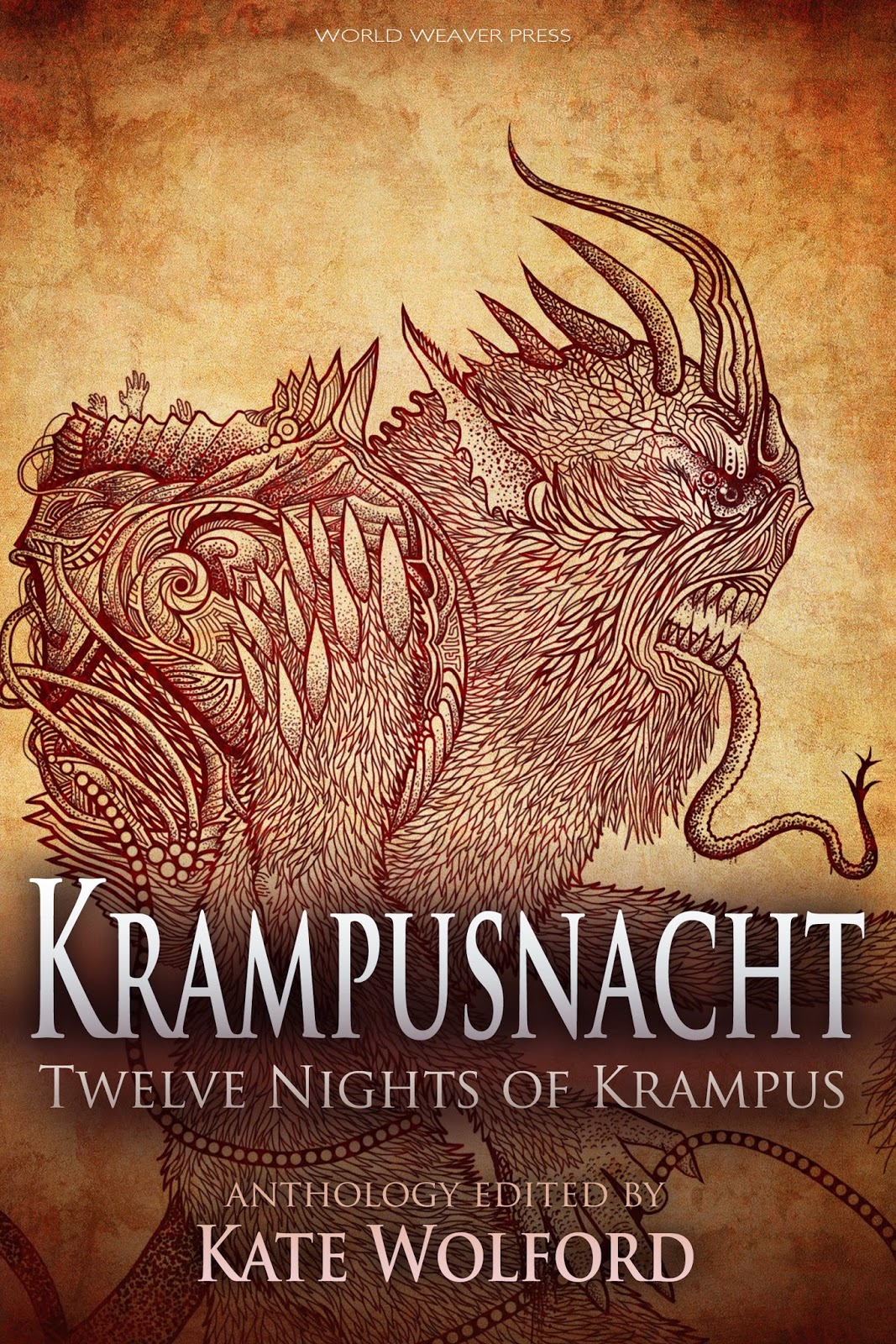 Alpena, MI (October 22, 2014) – World Weaver Press (Eileen Wiedbrauk, Editor-in-Chief) has announced the Christmas horror anthology Krampusnacht: Twelve Nights of Krampus, edited by Enchanted Conversation: A Fairy Tale Magazine editor and publisher Kate Wolford, will be available in trade paperback and ebook Tuesday, November 11, 2014.
The joy and terror of the season. For bad children, a lump of coal from Santa is positively light punishment when Krampus is ready and waiting to beat them with a stick, wrap them in chains, and drag them down to hell--all with St. Nick's encouragement and approval. Krampusnacht holds within its pages twelve tales of Krampus triumphant, usurped, befriended, and much more. From evil children (and adults) who get their due, to those who pull one over on the ancient "Christmas Devil." From historic Europe, to the North Pole, to present day American suburbia, these all new stories embark on a revitalization of the Krampus tradition. Whether you choose to readKrampusnacht over twelve dark and scary nights or devour it in one nacht of joy and terror, these stories are sure to add chills and magic to any winter's reading.
With new stories from Cheresse Burke, Guy Burtenshaw, Jill Corddry, Elise Forier Edie, Patrick Evans, Scott Farrell, Caren Gussoff, Mark Mills, Jeff Provine, Colleen H. Robbins, Lissa Sloan, andElizabeth Twist.
Krampusnacht will be available in trade paperback and ebook via Amazon.com, Barnesandnoble.com, Kobo.com, WorldWeaverPress.com, and other online retailers, and for wholesale through Ingram. You can also findKrampusnacht on Goodreads.
Kate Wolford is editor and publisher of Enchanted Conversation: A Fairy Tale Magazine at fairytalemagazine.com and editor of the book Beyond the Glass Slipper: Ten Neglected Fairy Tales To Fall In Love With. She teaches first-year college writing, incorporating fairy tales in her assignments whenever possible.
World Weaver Press is an independently owned publisher of fantasy, paranormal, and science fiction. We believe in great storytelling.

And now a visit with Scott Farrell who wrote "Krampus Carol."

1. How did you come up with your story idea?
I’ve been intrigued by the folklore surrounding the Krampus for years. I really enjoy learning about regional folklore of any kind, and the Krampus is a marvelous combination of the spookiness of Halloween/harvest and the sentimentality of Christmas. So, in “A Krampus Carol,” I wanted to craft a story that included elements of both seasons in the plot. It had to be more than just a story of a hairy monster wreaking havoc in the middle of the holiday season - I wanted to include a redemptive, emotional element to it that would bring out the archetypes that lie behind the Krampus myth - like all good folklore.

2. What is your favorite/scariest memory of the holidays?
I’m afraid my “scariest” holiday memory doesn’t involve anything supernatural. Several years ago I was on a snowmobile trip along the Continental Divide with my wife, and my snowmobile caught a tree that was hidden under the deep snow. I flipped and was thrown about 30 yards, and broke my arm pretty badly in the landing. The temperature was about 10 below zero, and we were a hundred miles from the nearest doctor - and I realized, as my wife was trying to construct a hasty splint before her fingers went numb in the cold air, that this was a pretty serious situation. Fortunately, we made it to a hospital okay (some major surgery was required to put my arm back together), but the bleak landscape and biting cold gave me a sense - just a little bit - of what it might be like to be trapped out in the elements before the time of modern transportation and communication.

3. What are some of your favorite movies during the holiday season?
I have to say I really love A Christmas Carol - just about any version of it. (Though I really like the ’84 version with George C. Scott.) Though most people think of it as a “holiday classic,” it’s easy to forget that it’s also a wonderful ghost story! Dickens does a great job of infusing the story with a dark sense of dread, which makes Scrooge’s transformation at the end all the more powerful.

4. If I were your favorite holiday treat what would I be?
A steaming peppermint mocha with an extra shot of espresso! And if you brought along your friend, “slice of pumpkin pie,” I would be even happier.

5. What was the worst/best Christmas gift you ever received? Why?
I hate to sound sappy and sentimental (horror authors are supposed to be dark and twisted, right?) but I can’t say I’ve ever gotten a “bad” Christmas gift. Any present from a friend or loved one means they are thinking of you - and that’s what the holidays are all about. Though I must admit that any gift that can be immediately put to use in making a big holiday breakfast - whether it’s a new griddle to make pancakes on, or a pound of gourmet smoked bacon - will be well-received in my house! I love Christmas breakfast.

6. Regifting-love it or hate it.
I’m fine with recycling gifts. (It’s the thought that counts!) I’d rather have someone actually enjoy a gift, even if it arrives “second hand,” than have it mouldering in a closet somewhere. (Although it sounds like there could be some sort of creepy story in that concept.)

7. Plotter or Pantster?
I’m definitely a plotter. I’m more creative if I know the basic framework of the story is as I’m writing - although I’m not adverse to changing that framework once the writing starts. For example, “A Krampus Carol” started out as a story about the Krampus terrorizing a group of teenage kids. Only after getting through a first draft did I feel that the story would be better if the target of the Krampus’ wrath was someone other than the young vandals. So, my plot-points definitely went through some revision.

8. Name three things on your writing desk.
1) A coffee cup - definitely can’t get much writing done without that. 2) A studio recording microphone - I record a periodic podcast through my Chivalry Today educational program, which includes interviews with authors working in historical fiction, Arthurian literature/fantasy, and non-fiction medieval history. (Anyone out there interested in being a guest on the show?) 3) The latest issue of the Buffy the Vampire Slayer Season 10 comic, which is my current “project completion reward.” When I finish a writing project, I let myself take a break and do something fun, and reading the latest exploits of Buffy and the Scooby Gang is what I’m planning to do when my interview questions are complete!

9. What advice would you give to new authors?
Write a lot, rather than thinking and talking about writing a lot. I give seminars at several writers conferences every year, and I see the same writers at these events, time and time again. Yes, it’s very helpful to sit in on presentations, get advice from established authors and agents, and share ideas and critiques with other writers. But I think a lot of young writers get paralyzed in thinking that just one more seminar, or one more agent meeting, or one more reading with a critique group will make it easier to start that story or book they’ve been thinking about. No, it won’t. Nothing will make it “easy,” and at some point you’ve got to make your own habits and your own process for writing.

10. What's next for you?
I’ve been invited to write a chapter for a book (to be released in 2015) titled “Superman Vs. Batman And Philosophy,” which will be volume number 100 in the “Pop Culture and Philosophy” series from Open Court Books. My chapter will be “The Dark Knight, The Man Of Steel, And The Philosophy Of Chivalry.”
After that … I’m working on a short story about a zombie plague outbreak in the 1930’s in Fordlandia, a rubber plantation (which never produced any rubber) established by Henry Ford in the Brazilian rain forest. The history of Fordlandia is full of hubris and tragedy, and I thought it would make a remarkable setting for a horror story of some sort. (Interestingly, I was inspired to write the “zombies in Fordlandia” story when I saw a request for submissions for the anthology “Dead Harvest,” which I see you, Dana, have a story included in. Obviously I wasn’t able to get my story done in time to make the deadline for that anthology, but I’m looking forward to reading a copy of it. Congratulations on getting your work included!) 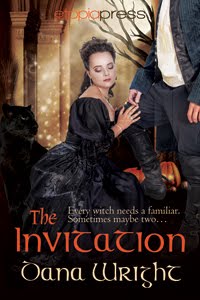 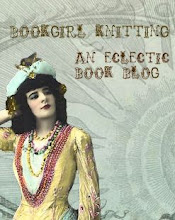